We have a winner!

Hi everyone!
Leanne you won!!! I hope you love it!
Thank you everyone for all of your comments and love on this purse. This purse is NOT that hard to make! Hell, I made it using Vinyl! The pattern is from Alexia's book Liberty Love   ALL ZIPPED UP BAG of awesomeness..
Thanks for stopping by for the Micro Mod Sew ALong!!
xoxo 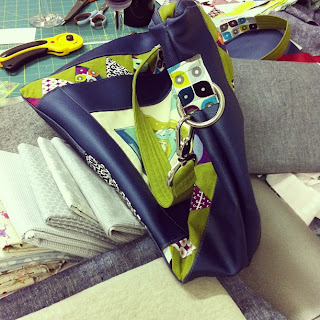 Happy Sunday and Welcome to my stop on the Micro Mod Sew Along!
I had the pleasure of meeting Alexia at Quilt Con and was thrilled to find out she would be teaching a class from her book Liberty Love at Drygoods Design here in Seattle. In her class we whipped up some Around town Tote bags and I got to see her All Zipped Up bag in class as well as the ever popular Marcelle Medallion Quilt. When Alexia invited me to be a part of this sew along I was thrilled.
Putting on my thinking cap I quickly resolved to making yet another (yes this is my third) All Zipped Up Bag from Liberty Love. I think that it's a perfect merge of this amazing husband/wife team. Alexia's pattern, Rob's fabric...a match made in Heaven? Well.....yes! 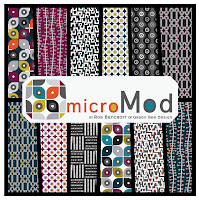 I just returned from a family road trip to California where I picked up some metallic vinyl. Not your typical quilting cotton mind you, a bit different, maybe even a bit odd (think your favorite diners seat cover).  More than either of those two adjectives a  bit delicious and retro especially paired with Rob's awesomely retro and funky line!
It all started with the triangles, I mixed the micro mod with what I believe I have identified as a green essex linen (not 100% sure on this) I added in some field study, a bit of Echino and the marvelous Melody Miller Telephone. 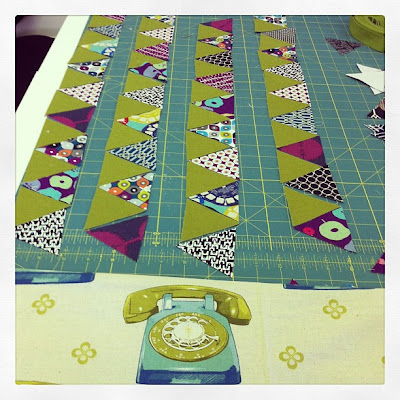 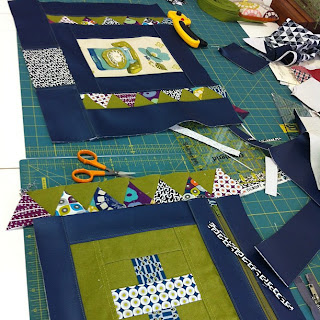 I added a front panel with a zipped pocket because I love a front zipper on a purse. 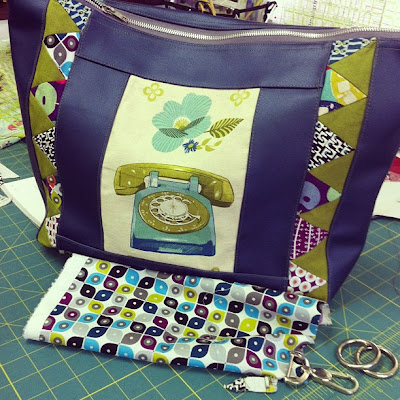 This is the bag almost done just waiting for a handle and some hardware. I lined the purse with what might be my favorite from the Micro mod line: Tick Tock in white! 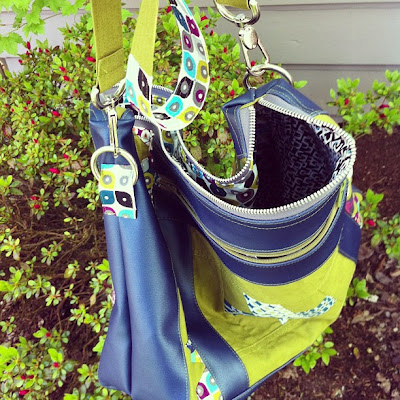 The All Zipped Up bag all done!All metallic, all funky all Micro Mod fun! 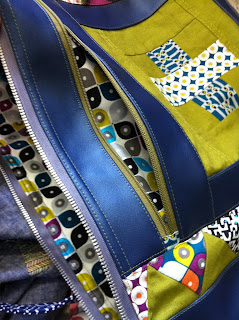 All Zipped Up is right and ready to go!!! 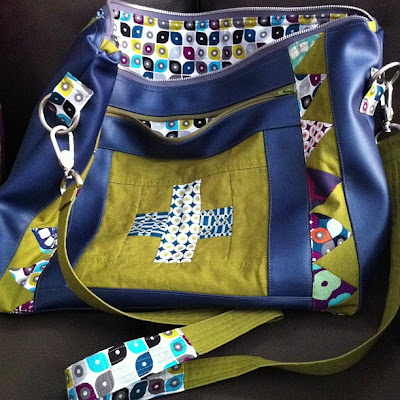 WIN THIS BAG!!!
If you would love this bag I would love to give it to you.
I ask three simple things of you: do something kind for yourself, do something kind for someone else and comment here with any reason you would love this bag. I will choose a winner on Tuesday evening.
I hope you have enjoyed this stop, and be sure to follow along with the rest of  the His and Hers microMod sew along! If you make a project from the sew along be sure to tag it on Instagram with #microMod , and add itto the microMod flickr group.
There will be prizes at each stop, and at the end of the month you can enter to win an amazing grand prize: A fat quarter stack of microMod by Rob Bancroft from Cloud9 fabrics, the entire Green Bee Patterns collection, a microMod sewing bag, and a Singer Heavy Duty Sewing Machine! (Open to contiguous US residents only.)
April 2 - Alexia & Rob Green Bee
April 3 - Kelly at Kelbysews
April 5 - Amanda at the Craft Junky
April 6 - Rachael at Imagine Gnats
April 8 - Heather at alamode
April 10 - Holly at Bijou lovely
April 13 - Alexia, Michelle & Rob Green Bee
April 17 - Faith at Fresh Lemons
April 18 - Katie at Swim Bike Quilt
April 19 - Deborah at Whipstitch
April 20 - Jacey at Jaceycraft
April 24 - Jenny at the Southern Institute
April 25 - Amy from sukie don't ya know
April 26 - Jen from Betty Crocker Ass
April 27 - Sara from Sew Sweetness
April 22 - Krista at Krista Withers Quilting
April 29 - Katy from I'm a Ginger Monkey
April 30 - Amber from One Shabby Chick
May 1 - Alexia & Rob Green Bee GRAND PRIZE 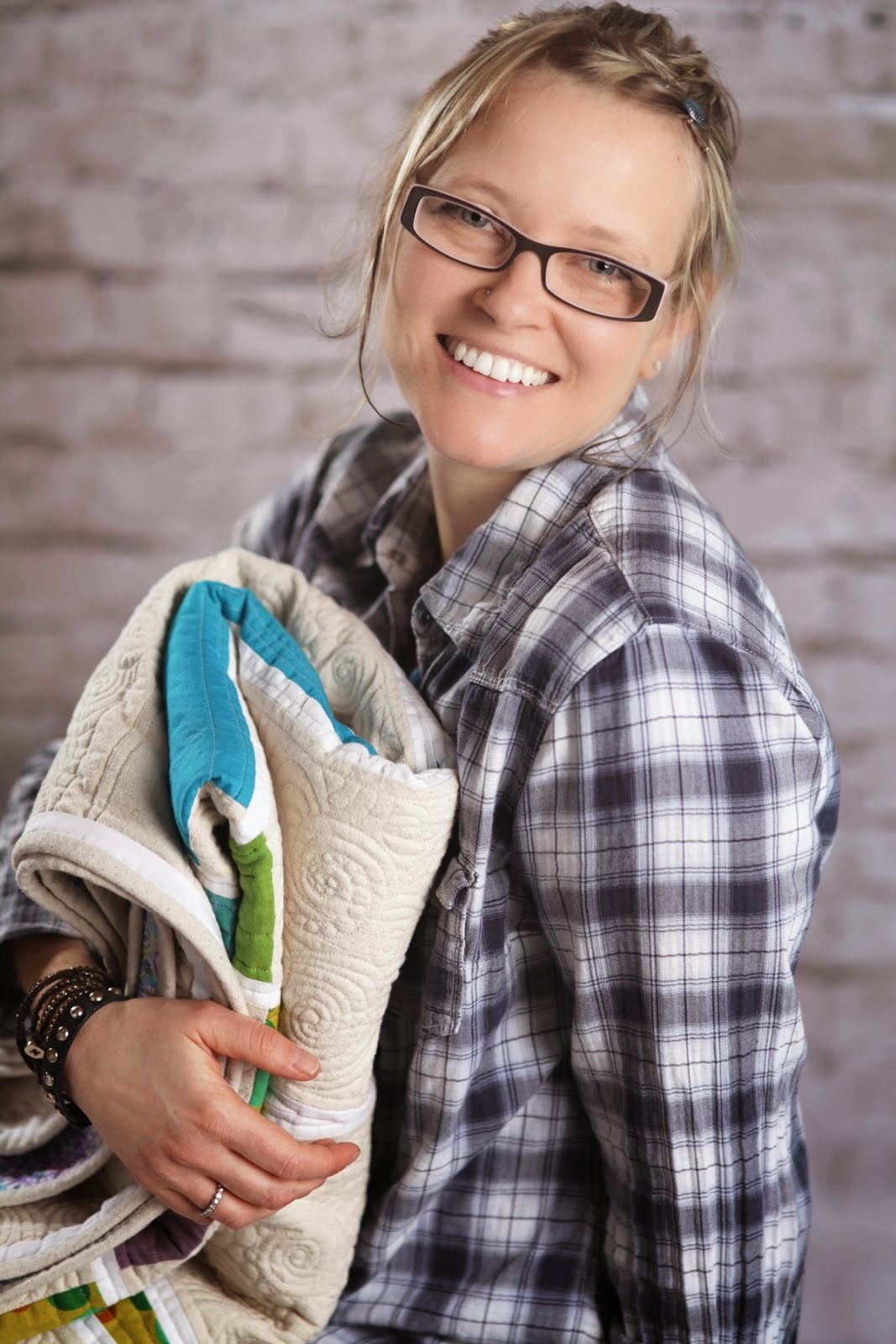